Several years ago a colleague and I presented on women’s history sources at the Hoover Library to the Women and Gender Historians of the Midwest.  Attendees were surprised to discover that the Hoover Library held more than thirty collections documenting women.  To celebrate Women’s History Month this year, we will feature some of these women’s collections. 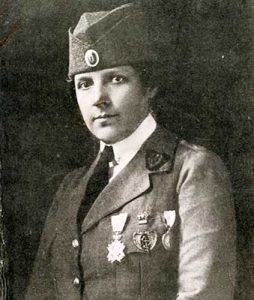 Given my background as a medical historian, my favorite hidden gem of a collection are the Rosalie Slaughter Morton papers.  Morton was a contemporary of Herbert Hoover.  She graduated from the Women’s Medical College of Pennsylvania in 1897 and went on to a long career as a surgeon and public health advocate.  At that time, these were unusual pursuits for a woman, but Rosalie Slaughter Morton was an unusual woman.  During World War I, she worked in field hospitals on the Salonika front in Serbia and was a founder of the American Women’s Hospitals service in France.  After the war, she created the International Serbian Education Committee to bring refugees to the United States for higher education.  She organized the Virginia Hospital Fund to buy equipment for Serbian hospitals and to build a tuberculosis clinic for children.  She was the first woman faculty member of Columbia University Medical School and was an attending surgeon at hospitals in New York, Virginia and Florida.  She wrote two memoirs: A Woman Surgeon and A Doctor’s Holiday in Iran.

Much of this is well documented by the seventeen boxes of Morton papers here at the Hoover Library. What is not well documented is how Morton knew Hoover.  Clearly they walked parallel paths during and after World War I: Morton doing humanitarian work in health care and hospitals; Hoover doing humanitarian work in food relief.  I could not determine whether their paths crossed.  Nothing in the papers of Rosalie Morton or Herbert Hoover shed light on this.  I was reconciled to this fact being lost to the mists of time when I came across a letter of introduction in the Lou Henry Hoover papers.

In a letter dated June 20, 1916, Ruth Stanley Farnam wrote to Mrs. Hoover: ‘The bearer of this letter, Dr. Rosalie Slaughter Morton, is one of our most eminent women surgeons and is, in addition is a particularly charming person….  I would like to propose her as a visiting member [to the American Women’s War Relief Committee] if that is possible, but I leave her, with all confidence, in your kindly hands as she is an ornament to our sex and it is my privilege to know her.’  Lou Hoover doubtless took advantage of this introduction as her relief work at this time was devoted to building hospitals in Belgium and France.

Ruth Farnam closes this letter reporting that she’d raised more than $35,000 for Serbian relief in June.  She was planning to personally deliver the funds in the fall.  She did so.  By October 1916, Farnam was serving as a volunteer nurse in the Serbian army.  After the Battle of Brod, October 11th 1916, Farnam enlisted in the Serbian army, becoming the only American woman in that force.