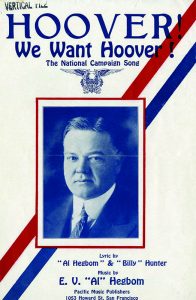 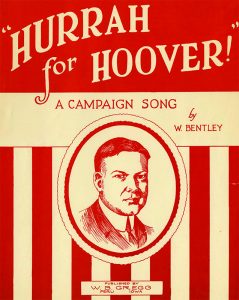 n 1928, campaign songs were not like the borrowed pop tunes or professional advertising jingles of today.  In fact, campaign advertising in all its forms was very different than today.  There was little centralized control, no focus group tested messaging, and certainly no requirement for candidates to “approve” anything.  Most campaign songs were not commissioned by a campaign organization or national party.  Some campaign songs were written by professional songwriters for direct sale to the public, with the hope that the connection to current events would boost sales.  Others were written out of genuine political conviction and typically circulated at a local level.  Some amateur attempts were hilariously bad. 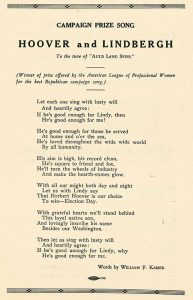 We have no evidence that Herbert Hoover had an “official” campaign song in 1928 — it doesn’t seem to have been something he and his campaign considered necessary.  Many historical sources cite a song called “If he’s good enough for Lindy,” but we have no documentation that connects any song with this title to Hoover’s campaign or to the Republican National Committee.

The title refers to Charles Lindbergh’s endorsement of Hoover for President, which was announced on October 4, 1928 (that’s right — just about a month before Election Day).  There were at least two very different songs that used this title.  One song with this title was recorded many years later by Oscar Brand and released on his CD “Presidential Campaign Songs:  1789-1996.”  I could not find the author/composer of this particular song.  We have in our collection a press release from the New York Republican State Committee, dated October 18, 1928, about another song entitled “If he’s good enough for Lindy” (also printed as “Hoover and Lindbergh”), which won a prize of $25 in a contest sponsored by the American League of Professional Women.  The winning lyricist (he borrowed the tune from “Auld Lang Syne,”) was William F. Kaiser of Jersey City, New Jersey.  The press release noted that 800 songs were submitted, of which 200 were variations on the World War I song “Over There,” usually with the title “Hoover There.”  This was a popular subject because Mr. Hoover was known as “the Great Humanitarian” for his relief work during World War I.  The Chairperson of the League noted that Kaiser’s song “got the prize because of its original theme and popular note.”

Another New York Republican State Committee press release noted that Republicans in Rochester, NY were fond of a song called “Carry on Hoover.”  No other details were given, and we have not been able to find a copy of that song.  Numerous other songs were mentioned in news clippings concerning campaign events from all over the country, many clearly of local origin and unknown on a national level.

Hoover apparently did not think that it was important to document campaign songs, because he kept virtually nothing about them in his files.  Over the years, the Hoover Library has acquired a small sampling of campaign songs, but it’s clear that many more existed.