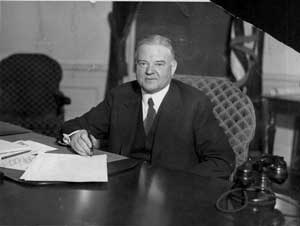 For many Americans, 1930 was a year of struggle as the national economy sank into what became the Great Depression. In the history books, the stock market and urban unemployment often take center stage, leaving aside the hardships of rural America.  Already reeling from a decade of depressed prices and farm foreclosures, a new threat to agriculture emerged in 1930: drought.

“Oh yes,” you might say, “I know about the Dust Bowl,” but the Dust Bowl was four years in the future, and for the most part, farther west. One problem with the Depression era was that one unprecedented calamity followed after another, at times blending together or even shoved aside as new, more desperate crises emerged. The 1930 drought was just the beginning of years of unimaginable suffering across the middle of the country. It was also the crisis that began the dismantling of Herbert Hoover’s Presidency.

In his annual message, Secretary of Agriculture Arthur Hyde called the 1930 drought “the worst drought ever recorded in this country.” The Weather Bureau reported that because of “its long duration, the large area involved, [and] the economic loss sustained,” it stood in “first place in the drought history of the country.”  The chairman of the American National Red Cross told a national radio audience, “In all its experience of more than a thousand emergencies the Red Cross has never been confronted by a disaster of larger proportions.”

In 1930, dry conditions touched 30 states from the Appalachians to the Rockies, but the brunt of the drought was felt in the lower Mississippi and Ohio valleys.  Arkansas was perhaps hardest hit, the epicenter of the disaster.  Wells and streams ran dry, crops failed, and by mid summer, thousands of farm families in the region faced starvation for themselves and their livestock.  Hoover, who had won the 1928 Presidential election as “the Great Humanitarian” and “Master of Emergencies,” seemed destined for the moment.  He had risen to fame providing food for millions of European civilians during and after World War I, and had led the American response to the great Russian famine — a famine caused in part by drought — from 1921 to 1923.

So Hoover acted.  In early August, Hoover ordered a county-by-county survey of drought conditions.  With data in hand, Hoover informed the nation that a “great many families” would need “assistance to live over the winter.”  Hoover designed a solution that would place much of the responsibility for relief at the local level, and on August 14, he held a conference with state governors to announce his plan.  Hoover believed that the essence of America was rooted in community cooperation, and “the Government should assist and encourage . . . movements of collective self-help.”  In Hoover’s view, the “American individualism” that made America unique would be weakened by top-down bureaucracy or large expenditures of tax dollars — the very means he had deployed so effectively overseas.

In Hoover’s drought relief plan, a national committee was set up to coordinate state committees, which would in turn organize committees in each county.  The local committees — over 1600 of them — were to take responsibility for helping their neighbors and turn to outside help only when local resources ran short.  When needed, the American Red Cross was to be responsible for “all cases of individual distress,” railroads were pressured to provide low cost transport of relief supplies and animal feed, a national committee of medical experts was established to address health and nutritional needs, and yet another committee was set up to coordinate emergency credit for recovery and longer term credit to help farmers start up again in the spring.

This last part of Hoover’s plan seemed to many out-of-touch — many farmers were mortgaged to the hilt, if not destitute.  Additional credit seemed unworkable.  Members of Congress floated the idea of Federal crop loans that would be forgiven if the next year’s crop failed.  Hoover believed that extending loans that might not be repaid blurred the distinction between credit and charity.  If charity was needed, Hoover thought the states could largely provide the funds, as they typically did.  Where they might fall short, especially in the hardest hit states, he turned to the Red Cross.

Hoover had a long and close relationship with the Red Cross, and he believed it embodied the best of America — an organization of volunteers, funded by charitable donations. It was structured to combine central coordination with local units staffed by local citizens.  If the Red Cross were to run short of funds, Hoover would be eager to lead a nation-wide fundraising drive to tap into the generosity of the American people.

2 thoughts on “Herbert Hoover and the 1930 Drought”